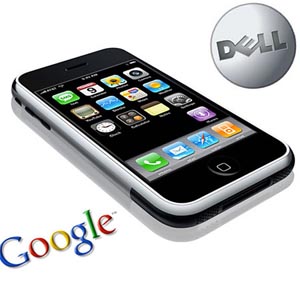 It seems that everyone wants a piece of the iPhone pie these days, but no partnership is quite as fascinating as the rumored one being forged between search engine giant Google and PC maker Dell. These are two of the biggest dogs in their respective yards, and by pooling together their resources, they just may have enough musclepower to topple the iPhone behemoth.

Naturally, neither Google nor Dell are confirming (or denying) these rumors, so this is reduced to just rumblings on the Interweb at this point. That said, we do know about the Google Android platform and how smartphones based on that platform could have a significant chance against the Cupertino creation. We also know that Dell has dabbled in the PDA market before, so it’s only a short leap to arrive in smartphone territory.

Current word has the Google-Dell hybrid making some of appearance at the 3GSM World Conference in Barcelona next month. The new handset might not be there, but the conference could serve as the stage for an official announcement. Competition is great for the consumer, because even if the Goo-Dell phone doesn’t succeed, it’ll probably make the next-gen iPhone better.