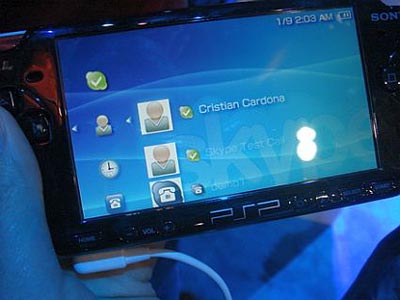 If you’ve been suffering from an insufferable itch for PSP-fueled Skype action, scratch no longer, because it’s here, it’s live and it’s (not quite) in person! The highly-anticipated firmware update for the Sony PSP has been given a version number of 3.90 and it’s available for public consumption.

Naturally, the main upgrade afforded by PSP firmware 3.90 is the inclusion of a PSP-specific Skype client, letting you latch onto an available WiFi signal and chat with all your favorite contacts from around the world. Outside of the mighty Skype-ness, the new firmware also affords some PlayStation Network improvements.

That’s the good news. The bad news is that if your PSP is not of the PSP-2000 series, you’re pretty much SOL when it comes to Skype, because this firmware version will only work with that series of handheld. If you’ve got a PSP-2000 series, though, feel free to hit the Network Update button for some crazy Skype action.