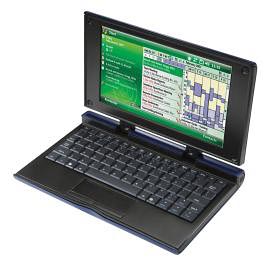 This is going to be terribly confusing for the average consumer. Despite having an 8-inch display and a form factor that looks like it’s supposed to take on the Asus Eee PC or HTC Advantage, the Redfly Mobile Companion from Celio is supposed to function as a Windows Mobile smartphone. Try holding this up to your ear for a lengthy conversation with the significant other!

Well, I guess that’s not completely fair, because the Redfly Mobile Companion isn’t a smartphone itself. Instead, you plug your WinMo handset into the Redfly, the latter of which acts as a “shell” for increased functionality, providing users with a larger display, a full QWERTY keyboard, and what looks like a mouse trackpad. Connection is achieved either through Bluetooth or USB.

The Redfly doesn’t have its own independent operating system, running instead off of the Windows Mobile streaming from your smartphone. The shell will start shipping in March with an asking price of $499.