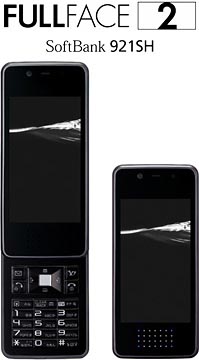 Softbank Japan is keeping pretty busy these days, most recently approaching a similar market as the Apple iPhone with the announcement of the Softbank Fullface 2, a mobile phone that — appropriately enough — features a large display across its full face. Also known as the SoftBank 921SH, this mobile phone does have one critical feature that the Cupertino offering does not: a slide-out numeric keypad and five-way navigator.

While in its closed position, you could say that the Fullface 2 looks a little more like a stretched out version of the LG Prada, but you can be sure that no one at SoftBank would acknowledge such a comparison. The 3.2-inch VGA LCD certainly looks attractive, but it’s not a touchscreen, strangely enough. It does have a motion sensor, however.

Manufactured by Sharp, the Softbank 921SH boasts a 3.2 megapixel camera, music player, Bluetooth, 1Seg mobile TV, and high-speed 3G. Look for the phone in black, white, blue, gold, and pink when it launches in March 2008.