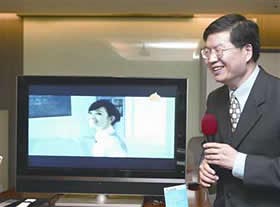 Asus knows a good thing when it sees it, so they’re totally going to cash in on the success of the Eee PC by releasing a series of other products that fall under the Eee banner. Asustek has announced that in addition to the mini notebook that has taken the world by storm, they also plan on releasing the E-DT (desktop computer), E-TV, and E-Monitor.

Presumably, this entire family of Eee products will be just as easy to learn, easy to work, and easy to play as their subnotebook counterpart. The main selling point for the Eee-branded desktop computer, television, and monitor will still be the low cost and high build quality associated with the Eee PC.

The E-DT desktop PC will not come bundled with a monitor, but it will come powered by an inexpensive Intel Celeron processor. Later generations may take on Intel’s Shelton’08 platform with Diamondville processors and 945GC chipset. Asus hopes to push pricing down to the $199 mark with the initial unveiling coming at CeBIT 2008.

The E-Monitor won’t be just an LCD screen, instead taking on the all-in-one market currently occupied by devices like the Apple iMac and Dell XPS One. Features include a built-in TV tuner and a 19-21 inch display. Pricing is expected to be about $500 with the launch coming in September.

The E-TV will be a 42-inch LCD TV with integrated Linux-based PC functionality. They hope to keep pricing around the $1200 mark, hitting the market this September.