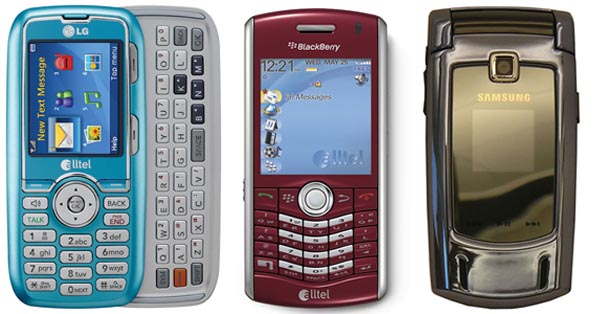 For anyone who’s been hooked on that whole MyCircle marketing campaign and you just can’t get enough of Chad, then you’ll want to take a gander at these three new handsets heading into Alltel stores during the first quarter of this year.

First up, we have the LG Rumor LG Scoop, a messaging-minded phone that boasts a regular numeric keypad in candybar form, but you can gain access to a full slate of QWERTY by pushing the secondary keyboard out to the right. This form factor is similar to some other LG messaging phones, as well as handsets based on the HTC Vox platform. Other specs include a 1.3MP camera, preloaded messengers, Bluetooth, Celltop, and your choice of three funky colors.

The BlackBerry Pearl 8130 isn’t exactly a new handset anymore, but Alltel has decided to give it a fresh coat of paint, releasing the smartphone to the masses with a brilliant deep red color scheme. Features remain the same, so you get a 2MP camera with flash, GPS, Bluetooth, microSD expansion, and that space-saving SureType keyboard.

Lastly, Alltel is staying flipping stylish with the Samsung Muse clamshell. The shiny coating will certainly catch a few eyes, as will the stealth media controls on the front cover. Better still, the Muse is perfectly capable of XM Radio Mobile, as well as boasting GPS, Axcess Mobile Guide, stereo Bluetooth, and a 2MP camera.