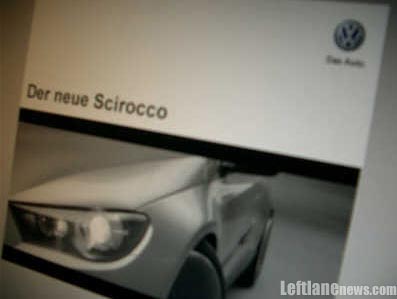 For many Volkswagen enthusiasts, the Rabbit just doesn’t cut it. They’re much more interested in a real sports car and the 2009 VW Scirocco just might satisfy that itch. And we’ve got the leaked brochure that points towards some of the car’s final styling.

We’ve seen a series of spy shots in the past, but these have typically been of either IROC concept vehicle or a heavily camouflaged iteration of the production model. The brochure, in this way, is probably as close to the real road-ready model that will be hitting European showrooms soon. Unfortunately, the suits are still saying that the Scirocco won’t be coming to the States because “we don’t want it” and it could cannibalize sales of the GTI.

Based on the brochure picture, we think that the front end of the production Scirocco “should closely match the one on the show car”, but the interior has lost the cool blue lighting in favor of a more standard glowing red. Check out the Read/Via link below for more shots.