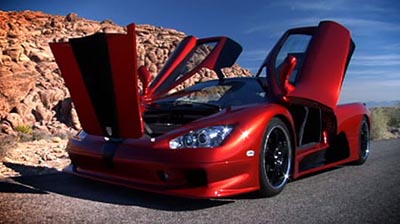 With 1001hp and a seven-figure price tag, the Bugatti Veyron is one of the most drooled after supercars this planet has ever seen, but it’s not the fastest. That title now belongs to the SSC Ultimate Aero.

While I’m not exactly sure if the Shelby SuperCars Ultimate Aero is commercially available to the average (millionaire) Joe, they did put the high-powered vehicle through an official Guinness World Records-sanctioned trial run and it did in fact come through with an average trap speed faster than that of the Bugatti Veyron. The Veyron unofficially has a record at 253mph, but the average speed recorded for the Ultimate Aero was 256.18mph. The first pass was an astounding 257.41mph.

“If there was additional straight pavement on which to accelerate, the top speed would have been considerably higher,” said Ultimate Aero driver Chuck Bigelow. “If anyone challenges our record there is tons left on the table.”