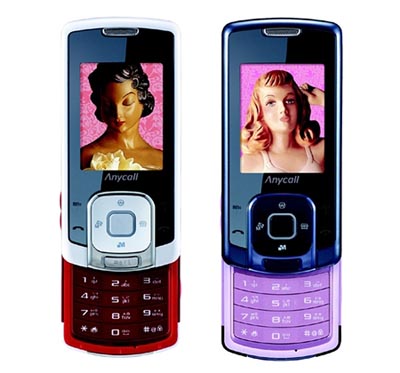 Your inner child wants to express itself through color, but you’re not prepared to walk around town in a gawdy green phone. What can you do to satisfy both of these urges and inclinations? Samsung is coming to your rescue, announced a new line of “Secret Color” phones that look pretty normal when closed, only to reveal eye-catching colors when opened.

The first two handsets in this line are a couple of sliders: the SCH-W360 and the SPH-W3600. As you can see, when the phones are closed, you get a pretty standard piano black finish from Samsung, but the keypad hidden within is available in blue, pink, green, and red. The touch-sensitive controls also come with vibration feedback for a bit more of a tactile feel.

Another cool feature is that both of these phones are capable of up to two concurrent Bluetooth connections with data speeds as high as 7.2Mbps. Bundled with the phone are some “benefit” makeup products for the ladies. Pricing is expected to sit between 500,000 and 600,000 KRW, which works out to $525 to $630.