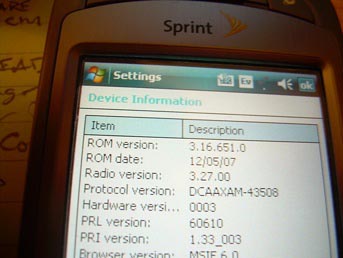 The HTC Mogul from Sprint is one of the better-equipped Windows Mobile smartphones on the market, having been reiterated and renamed for a number of different carriers. Despite its relative popularity among the corporate crowd, there have been a few things missing from the HTC Mogul that made it feel incomplete. Thanks to a new ROM update, it’s a little more complete now.

The latest ROM has leaked onto the Internet and folks who have managed to snag a copy and update their handsets have discovered a couple of very notable upgrades. For starters, the HTC Mogul now provides “unfettered” GPS support, as well as support for the super-speedy EV-DO Rev.A network. A few other changes are also made, but those are the biggest.

No indication has been made as to when the latest ROM will become available on a commercial basis, as these upgrades are only available through a beta version of the ROM. So close!