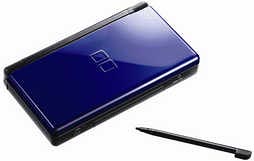 When the red-and-black Nintendo DS Lite hit the market, I could help but to drool just a little. I didn’t think that having a two-toned color scheme could look so great on the portable gaming machine and neither did a lot of people. Nintendo did a great job in that respect, getting us to want a new DS Lite, even we already owned the aging Polar White version.

Well, get ready to break out the checkbook again, because Nintendo is adding another color scheme to the palette of Nintendo DS Lite portable gaming machines. And it’s a two-toner. The styling is much the same as the red-and-black version that was released some time ago (Crimson Red, I think it was called), except the red has been swapped for blue.

The good news is that the Cobalt Blue DS Lite can be found on Circuit City online for the usual price of $129.99. The bad news is that it’s listed as “coming soon” and we have no idea when they’ll start shipping.