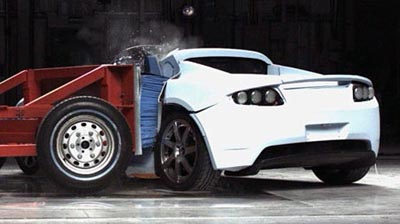 Although they’re still ironing out some kinks for the transmission, the Tesla Roadster has just overcome a rather major hurdle preventing its sale in the United States. There are hundreds of requirements and tests that must be done before a car can legally hit the roads in the States and it seems that the Tesla Roadster “has finished taking and passed every test of the Federal Motor Vehicle Safety Standards.”

It might be a little painful to see the beautiful electric sports car get all crunched up, but some prototypes had to be sacrificed for the purposes of the crash tests. They also had a look at emergency cutoff systems, the ability to defrost the front windshield quickly and adequately, and how the headlights are positioned. They don’t want them lo-beams to blind oncoming traffic.

Seems like the Tesla Roadster is finally a-go. Look for it to fully enter production on March 17th.