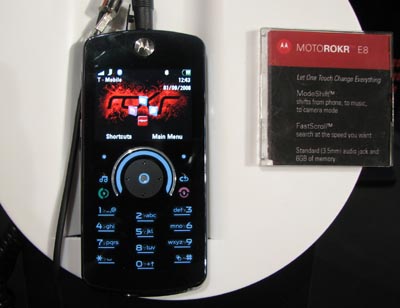 Like so many other cell phone manufacturers, Motorola separates its lineup into a number of series, each of which caters to a certain segment of the market. For example, Sony Ericsson has Walkman phones for music junkies and Cyber-shot phones for shutterbugs, but realistically, the two lines can do much the same thing; it’s all just clever packaging and marketing. Following in the same line of thought, the ROKR line from Motorola is supposed to focus on music.

When the Motorola ROKR E1 first emerged on the market, some folks thought it was a valiant effort, but the candybar was ultimately pretty boring and left much to be desired. Fast-forward to today and we’ve got the much more attractive Motorola ROKR E8, a music phone that boasts a mighty morphing keypad that adjusts to suit your current needs. Easily the most notable feature on this SLVR-like handset is the touch-sensitive keypad, because it doesn’t really have any conventional buttons.

I didn’t really have a chance to give the ROKR E8 a proper real-life test, but I did get to have a fairly extensive fondling of it at the Consumer Electronics Show in Las Vegas earlier this month. To my knowledge, it was not possible to make a call using the demo units, so I cannot speak to its voice clarity or reception. That said, I did get to fully experience the music player, embedded camera, and — of course — the unique control scheme.

In terms of size, the ROKR E8 has a similar form factor to the Motorola SLVR L7, but it does feel a touch thicker and a smidget wider in the hand. I would have preferred a more metallic feel to the body, but the choice of plastic appears to be fairly high quality. The color display is reasonably bright, but the resolution and color reproduction were a little disappointing.

When the keypad is not illuminated, you’ll notice that there are a series of small black bumps protruding from the touch-sensitive section of the phone. These are presumably there to help guide you to the right virtual button, but these bumps totally take away from the sleekness of the handset. I ultimately don’t think they’d be that helpful in “blind” button-pressing anyways.

One of the critical updates that the Motorola ROKR E8 was supposed to bring to the table was a new user interface that is based on Flash and Linux. This didn’t really appear to be the case with the demo units on display at CES, or if they were rocking the new operating system, they looked a heck of a lot like the Motorola menus that we’ve come to expect on everything from the RAZR to the PEBL. If you hated the Moto UI before, you won’t exactly fall in love with the UI on the ROKR E8. 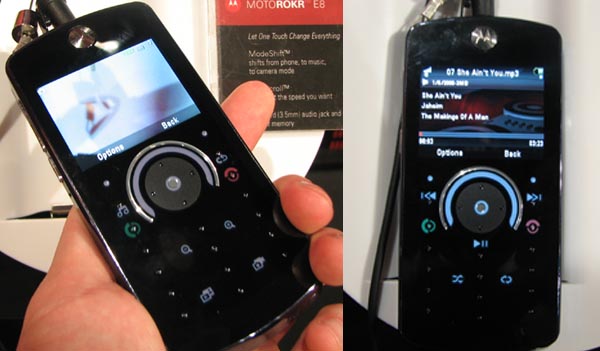 Naturally, the big thing that’s supposed to sell the ROKR E8 is the innovative keypad. While in phone mode, the usual set of digits light up so that you can dial up your friend’s number. As soon as you enter any sort of music functionality, new controls emerge for play/pause, shuffle, and repeat. For the camera, you get stuff like zoom in and out. The keypad lighting was fairly dim, but you could still see them under the trade show lights. I’d imagine that the illumination would get a little washed out in the bright Las Vegas sun, though, so that’s probably why they felt the black bumps had to be included.

I also remember hearing about “haptics” tactile feedback. I didn’t get the vibration feedback that I got on the LG Venus and Voyager, but it almost feels like a physical button clicking. It’s not quite there and it certainly doesn’t help that the controls didn’t appear to be particularly responsive. The same can be said about the “FastScroll” navigation wheel, which is trying to be like the iPod click wheel in some ways. You can scroll through playlists with it, but the wheel doesn’t form a full circle. Weird.

In case you didn’t catch the Motorola ROKR E8 the first time around, here are some of the key features and specifications for those of you who have a particular interest in numbers and acronyms.

I used to be a big fan of Motorola products, but as the other manufacturers have continued to step it up with cool new features, better user interfaces, and more interesting designs, Motorola has started to lag behind. The ROKR E8 is supposed to be hip and new, but outside of the “haptics” morphing controls, the ROKR E8 is little more than a dressed version of the SLVR. The feature set is quite good, to be sure, but I was ultimately left quite unsatisfied with the final result.

It’s probably a good idea for me to preface this by saying that I’m generally not a fan of touch-sensitive controls, although I love the use of touchscreens (I use an HTC Wizard as my primary handset). I was hoping that the morphing keypad and “haptics” feedback would overcome some of the shortcomings to many touch-sensitive devices, but it’s really no more responsive than other similar handhelds. With the potential for illumination that gets washed out in bright light, the usability of such a scheme is further diminished.

Motorola should be applauded for trying something new, but I’ll have to disagree with CNET — which gave the ROKR E8 a best of show award in the mobile phone category — and say that Moto’s still got quite a ways to go with the ROKR E8.