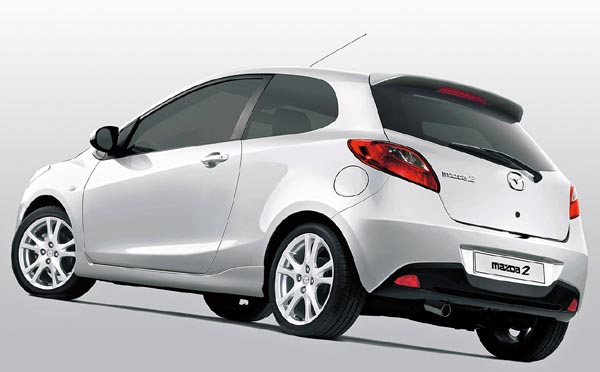 As we prepare for the Geneva Auto Show in March, let’s have an early look at the entry-level Mazda2 hatchback which is set to make its debut at the popular motor show. The Mazda2 is not currently being offered in North America — as far as I know — but we do its bigger brother, the Mazda3.

I personally think that the Mazda3 hatchback looks a little too much like a shrunken station wagon, but that could largely be due to its five doors. For a more compact car appeal, the Mazda2 hatchback will only have two doors, in addition to the hatch in the back. The current model, which is not available here, sells as a five-door hatch and a four-door sedan.

The 2008 model year will see a redesign for the entire Mazda2 line and that includes the introduction of the three-door model you see here. It should compete quite nicely against the Toyota Yaris, Nissan Versa, and Honda Fit. Look for it with 1.3L and 1.5L gas engines, as well as with a 1.4L turbodiesel.