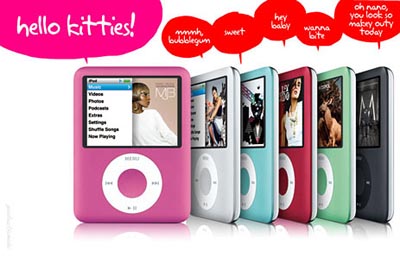 As if the onslaught of pink Motorola RAZRs and other consumer electronics weren’t enough already, Apple has announced the iPod nano will be made available in a rosy hue for Valentine’s Day. If you’re looking for special Bluetooth (Pinktooth) features or anything else like that, you might as well look somewhere else.

From what I can gather, Apple will only be selling the pink iPod nano in an 8GB flavor, so you won’t be able to cheap out on your girlfriend with a 4-gigger or something. Thankfully, they’re not charging a premium for the pink edition, selling the 8GB nano for $199. Strangely, there’s no mention of a charitable motivation from Apple (unlike Product RED), so this is just a big cash grab on their part.

The idea of spending a couple hundred dollars on some flowers and chocolate is so played out. It’s time to jump into the 21st century and reward your most significant other with some Apple goodness. In pink.