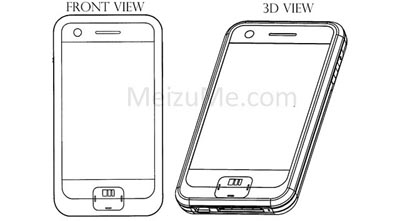 This has got to one of the funniest patent applications in the history of consumer electronics. Well, maybe funny isn’t the right word. It’s more like ironic. Sifting through the filings from last February, we discovered that Meizu put through a patent application for their M8 touchscreen cell phone. As you recall, this is the handset that is widely known as the iPhone clone.

In this way, you’ve got to wonder if Meizu has any chance of having this patent approved, seeing how their device is a blatant ripoff of another handheld created by a much larger company. Steve Jobs would not approve, though I am surprised that Apple didn’t bother with any sort of legal action. Also bear in mind that this patent was for the older version of the Meizu M8, not that the newer one is any less like the iPhone.

Given the nature of this patent, is it only a matter of time before random Chinese manufacturers start patenting their fake Nokias, fake iPods, and fake everything else?