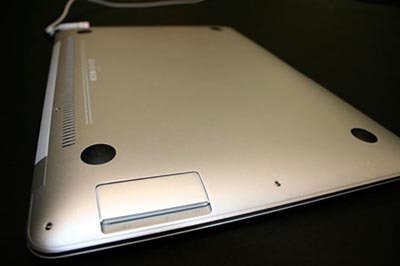 Well, sort of. Although the back of the MacBook Air is all sealed up like an iPod, there is apparently the possibility of replacing the battery yourself. It’s just not nearly as easy as most other laptops wherein you just have to push a switch or similar mechanism to release the battery.

As it turns out, all that’s needed to give your MacBook Air a new battery is a size 0 Philips head screwdriver, about three minutes of your time, and a $129 replacement internal battery from the guys in Cupertino. The process is supposed to be very straightforward and even the not-so technically-inclined can probably do it. Unfortunately, it’s not that simple.

Apple is “recommending that anyone looking to get their battery replaced needs to bring their laptop into a Genius Bar.” Apparently, we’re not l33t enough to do the swap ourselves, but at least we now know that it’s possible.