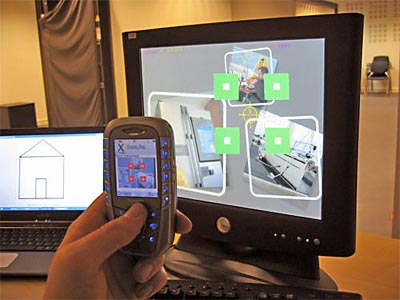 Don’t you hate having to pack all those peripherals with you when you go traveling? It’s already enough to lug around a laptop, but then you’ve got the webcam, mouse, USB drives, and all sorts of other doo-dahs that take up far too much space. Some UK researchers could be helping to lighten your load, because they’ve created some prototype software that lets you use your cell phone as a 3D computer mouse.

When you wave your camera-equipped mobile phone around in the air, it can manipulate objects on the computer screen, just like a computer mouse. To make it even more interesting, when you move the phone in and out, this can be interpreted as the need to zoom. In effect, you have a 3D mouse, not unlike the Logitech MX Air. Connection between your phone and the computer is achieved via Bluetooth.

As if that we’re enough, you can even rotate your phone to rotate 3D objects in a rendering or animation program. More information, including a paper on the prototype setup, will be made available at the International Conference on Computer Vision Theory and Applications in Portugal later this month.