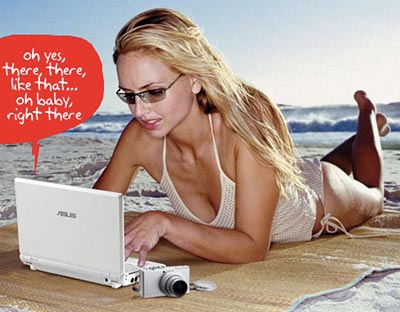 The Eee PC sub-notebook has been a huge success for Asus and they plan on keeping a good thing going by releasing a touchscreen-enabled model later this year. This is not coming from the Taiwanese manufacturer itself, but a newspaper based out of Taiwan is saying that the second-generation Asus Eee PC will be ready before Santa makes his rounds in 2008.

Digitimes says that the next-gen Eee PC “will support 8-, 9-, and 10-inch panels. The 9-inch panel versions will feature a touch panel.” We’ve heard about the increase in screen size before, but Asus had nothing like that at CES last week. Maybe they’re still working on it. Whatever the case, the price difference between a touchscreen-packing Eee PC and a regular one is said to be “under $15 per laptop.”

If you can’t wait until the official touchscreen Asus Eee PC, you can always modify your Eee PC yourself. But you’ll have a seven-incher. I could make a bad joke about male enhancement, but let’s not go there.