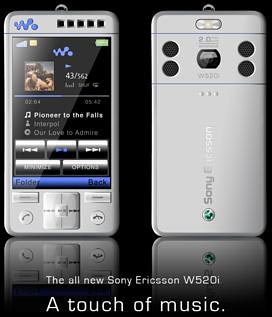 I’m going to try and avoid the inevitable comparison to a certain handset coming out of Cupertino, but you can probably see the parallels with this cool concept phone dreamed up by Muhammad-Oli of Esato. The Sony Ericsson W520i concept phone eschews a regular keypad in favor of a large touchscreen display, complemented by a set of very basic buttons underneath.

You get a five-way navigator, call and end keys, and a couple of soft buttons for most of your basic needs, but it’s through the large touchscreen display — use your finger, not a stylus — that you’ll be accessing things like the Walkman 3.0 player and the 2.0 megapixel camera (with VGA video at 30fps). The designer also envisions the use of an image stabilizer, TrackID, Bluetooth A2DP support, FM radio with RDS, and four stereo speakers on the back.

Given the model number and form factor, Muhammad-Oli believes that the Sony Ericsson W520i would be a great music phone that’d hit up the low to mid-range market. Too bad it’s just a pipe dream and it has little to do with the actual phonemaker. Maybe they’re paying attention though.