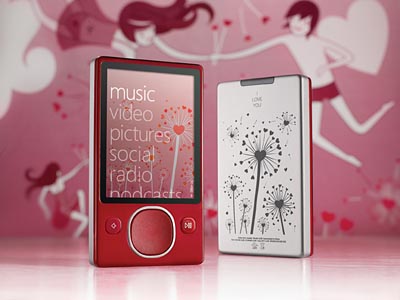 Not to be confused with that whole Product (RED) thing, there will reportedly be a red version of the Microsoft Zune 80 available to the masses in time for Valentine’s Day. This follows in the same line of marketing thought as the trio from AT&T, which does not include a red iPhone.

Unlike the AT&T arrangement, however, the red Microsoft Zune has actually been officially announced by the guys based out of Redmond, Washington. The plan is to sell the rosier version of Microsoft’s portable media player for a limited time only through the company’s Zune Originals website, the same place were you can get all sorts of etch-a-sketch themed players.

Thankfully, the pricing for the red 80GB Zune is the same as its garden variety counterparts. No Valentine’s Day premium? That’s blasphemy!