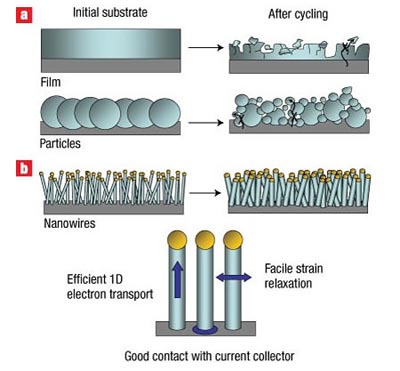 I hate being tethered to a wall outlet, but at the same time, I want to enjoy my laptop at its most optimal of performance levels. Researchers at Stanford Tech are coming to our rescue, developing a laptop battery that will reportedly provide up to 40 hours of life on a single charge.

The new battery uses a technology that is wholly different than current notebook batteries. As you can see through the provided diagram, the current use of film and particles can result in some rather nasty degradation after the battery has been put through a cycle, but the Stanford battery makes use of nanowires. These retain their shape and, thus, maintain good contact with the current collector.

Stanford Tech researchers are saying that silicon anode-based battery will be available in a few years time. These silicon anodes “have a theoretical capacity ten times larger than that of the graphite anodes currently used.”