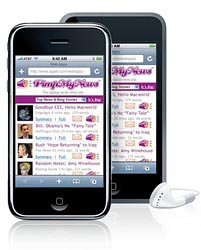 The handset that has come to be known as the Jesus Phone is never running out of tricks and it really has very little to do with Steve Jobs and Apple. There is such a huge community of developers and enthusiasts that are looking to expand the functionality of the iPhone, so Cupertino can just sit back and watch the interest grow.

Such is the case with MacWorld where the guys from PimpMyNews.com are showing off a web application that gets your iPhone to read you the news. We’re not talking about having a series of text displayed on the screen; any news site can do that. Instead, this is the world’s first “talking social news application.” It takes the top text news stories and converts them “to near-human sounding audio that users of iPhones, iPod touch devices and other mobile devices can listen to wherever they happen to be.”

Listen to the news on the subway instead of reading it. The application is said to be so good that it has received the “Staff Pick” designation from Apple. Better still, PimpMyNews is free.