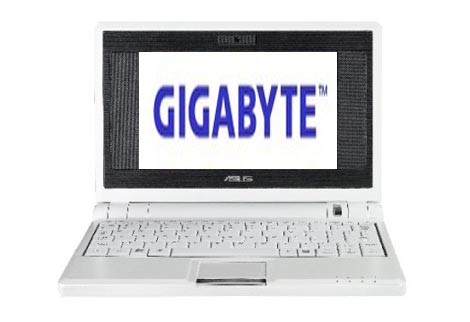 Who would have known that the budget-minded Asus Eee PC micro-laptop would become as popular as it has been? The raw specs and features are nowhere near what has become the standard for notebook computers, but people seem to love the compact form factor and the attractive price.

Recognizing a new market to approach, several manufacturers are currently working on mini notebooks to compete against the Asus Eee PC. Among the names thrown into the hat are Acer, Dell, HP, and — newly added today — Gigabyte.

The low-priced notebook market is definitely on the rise and all these firms recognize that there is plenty of money to be made. Think about it. The Eee PC only has a Celeron processor and anemic level of on-board storage, but it sells like freaking hotcakes. Word is that the Gigabyte iteration would feature a 1.6GHz processor (533 MHz FSB), making it quite a bit faster than the Asus number. Will this be reflected in the price? Time will tell.