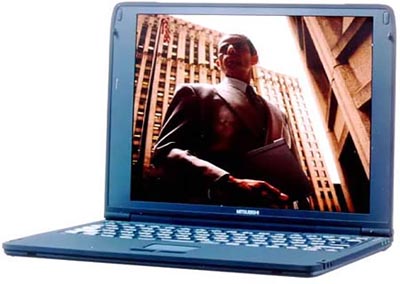 When Steve Jobs took the stage at MacWorld earlier this week, everyone thought that the MacBook Air was the thinnest notebook ever created. Turns out that it’s not and the lappy that beats it was actually released back in 1998. Considering that was a full ten years ago, it’s understandable that some people may have forgotten.

The notebook in question is the Mitsubishi Pedion. Naturally, the Pedion isn’t nearly as powerful as the MacBook Air, but they did manage to make it slightly slimmer. The Pedion is 18.4mm thick, which works out to 0.7244 inches. At its thickest point (the hinge), the MacBook Air measures 0.76-inches, meaning that the Mitsubishi number is about 0.0356 inches skinner. Of course, the Air narrows down to 0.16-inch at its slimmest point, but we’re talking about the girthiest part.

At the time, the Mitsubishi Pedion retailed for $6000, granting users access to 64MB of RAM and a 1GB HDD. The case was made from magnesium for extra stiffness. Unfortunately, the Pedion was pulled from shelves due to complaints from the marketplace.