The biggest announcement yesterday morning was the revealing of the MacBook Air. People have been drooling over its lightweight construction and ultra-slim profile for over 24 hours now, but how does the MacBook Air compare against its direct competitors?

Gizmodo has pit the new Apple notebook against four of its most formidable opponents, all of which are impressively skinny and ultraportable. Is the MacBook Air really worth its $1,800 (and up) asking price, or are you better off spending your money on a different notebook? Well, looking at the specs on the Dell XPS M1330, Toshiba Portege R500, Fujitsu LifeBook S2210, and the Sony Vaio TZ150N, it looks like the MacBook Air is not the best value.

On the downside, the MacBook Air has the smallest hard drive of the bunch and it’s not even SATA (it’s PATA). This is because Apple opted for the 1.8-inch form factor instead of the 2.5-inch. The hard drive is also the slowest at 4200rpm, whereas the rest of the bunch are rocking 5400rpm drives. You also get integrated graphics and a lack of a graphics card.

It’s hard to say which lappy is the best, because it depends on your needs and preferences. Peep the chart below for a full comparison. 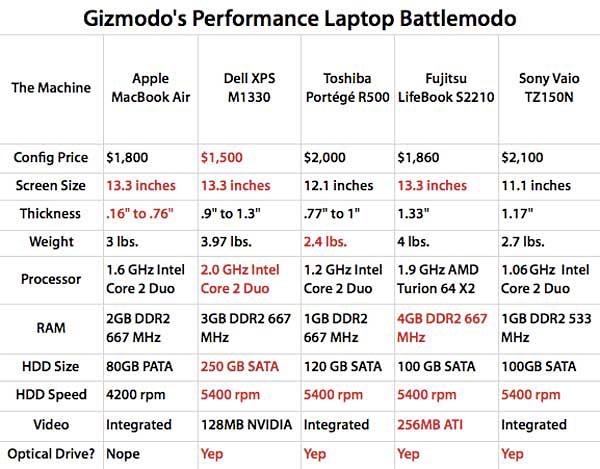