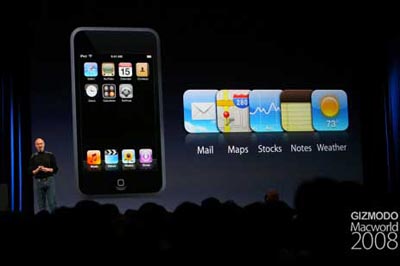 You could say that the iPod touch is really just the lesser cousin of the iPhone, because it’s almost as good as its cellular-equipped brethren, but not quite. Apple is finally looking to even out the playing field between the iPod touch and the iPhone, announcing an update for the former that provides some extra functionality. The downside is that this update is not free.

For a fee of $20, your iPod touch will now be equipped with a full-fledged Mail program, as well as a Maps feature that will grab your currently location using Wi-Fi triangulation. Other goodies that get bundled in with the update include web clips, stock quotes, weather information, and even the coolest app of them all, Notes.

Bear in mind that the extra twenty bucks only applies to existing iPod touch owners. If you happen to waltz into a store in a few days, the iPod touch they have on the counter — well, all units shipping from the factory today forward — will already come loaded with the update. Why charge $20 for something that’s free to new adopters?