We’re still waiting on a production version of the Lexus LF-A supercar, but in the meantime, the Japanese automaker has produced a roadster variant. The hot convertible looks much like its roofed coupe cousin, getting powered by the same monumental 5.0L V10 engine, developing somewhere in the neighborhood of 500 horsepower.

The Lexus LF-A Roadster Concept does boast several design modifications over the coupe concept that we saw about one year ago. These changes may also filter through to the Coupe, but we can see them in action on the Roadster here. You’ve got things like reshaped headlights, a reworked front fascia, modified side skirts and intakes, and a reshaped trunk.

The layout on this particular vehicle is similar to the Mercedes SLR, rocking something than the engineers call a “front-mid” configuration. This means that the engine is “mounted in front of the passenger compartment but behind the front-axle centerline.” Whatever they call it, I want it and I want it now. Bring this to production, Toyota! 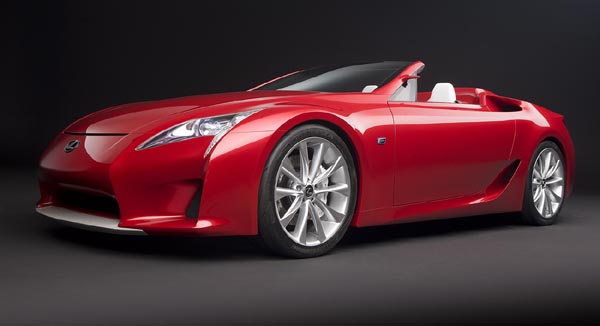