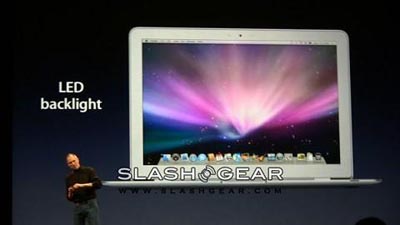 This is Apple that we’re talking about, after all, so it only makes sense that the company has already thrown together an incredibly slick advertisement that would fit in perfectly among the rest of their commercial line. The next time you flip on the television, you could be watching this very ad, convincing just how hot and sexy the new MacBook Air happens to be.

As you recall, the MacBook Air doesn’t have any optical drives, nor does it rock WiMAX or cellular broadband, but the Air is ridiculously thin at just 0.76-inches of girth at its slimmest. The touchpad is also gesture-sensitive, borrowing a few cues from the hugely successful Apple iPhone and its multi-touch capabilities. If you want a lightweight notebook, the three pound MacBook Air could be it.

In the commercial that you can view below, you’ll see the MacBook Air emerge from a plain manila envelope, further emphasizing its lightweight and slim characteristics. We still don’t recommend that you ship the MacBook Air in an unpadded envelope.