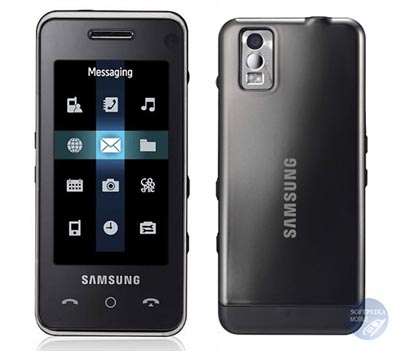 Everyone at Samsung probably hates it when people compare their devices to the Apple iPhone, but when you officially announce a cell phone like the Samsung F490, the comparisons are inevitable. Previously, we caught a sneak peek at this handset through a random Ukrainian source, but at the time, nothing was set in stone nor did we have any idea whether this device was even for real.

Samsung has now officially revealed the Samsung F490 and, yet again, comparisons to the iPhone are popping up. The F490 features a large 3.2-inch TFT touchscreen display that covers nearly the entire front face of the phone. Underneath are a few touch sensitive controls for basic stuff like initiating and ending a call. The display can also be used in landscape for video watching.

Core features include 130MB of internal memory, Bluetooth, USB, tri-band GSM/GPRS/EDGE, and HSDPA. Look for the Samsung F490 to drop in Europe next month for $780.