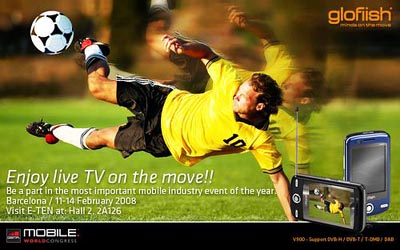 Hot on the heels of CES 2008 is 3GSM in Barcelona and we’ve already got one of the biggest scoops of the upcoming show. E-TEN is getting a bit of a head start on 3GSM by announcing the upcoming Glofiish V900 mobile entertainer.

Although the Glofiish V900 looks like a pretty boring PDA, all you have to do is extend that antenna and you’re open to a world world of wireless entertainment. The acronyms that this thing is packing reads like a road warrior’s wet dream. For starters, you get goodies like T-DMB and DVB-H, but it also handles DAB digital radio, as well as DVB-T terrestrial TV. That’s no fewer than four wireless standards to keep you staring at that screen.

Outside of the radios, the Glofiish V900 rocks a Samsung 667MHz processor and 128MB of RAM. I’d imagine that the display is a touchscreen too, but we’ll have to hang tight until next month when E-TEN has the Glofiish V900 on display in Barcelona. Check them out in Hall 2, 2A126 at 3GSM.