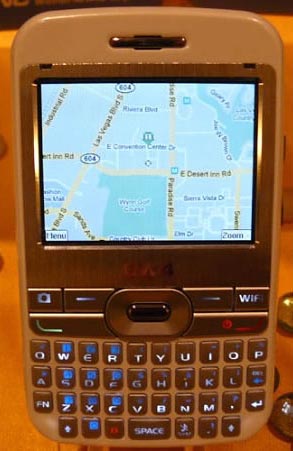 I can’t believe I missed this during my whirlwind tour of CES 2008 last week. Turns out that the world’s first smartphone powered by the Google Android platform was on display at the CES and the form factor is eerily reminiscent of the Palm Centro and other similar devices. The kicker is that the device comes from a company you’ve probably never heard of.

The Wistron GW4 smartphone was introduced at the electronics expo, but the version on display was running a Linux operating system. According to the company rep, the handheld will start rocking Google Android after it is presented to the big firms in March for branding. If everything goes according to plan, this will make it the first official Google Phone.

If you’re interested in the raw specs, the Wistron GW4 smartphone boasts a touchscreen, QWERTY keyboard, GPRS, 2 megapixel camera, TI OMAP 1710 processor, 802.11g WiFi with SIP VoIP, Opera, and the introduction of 3G connectivity by the end of the year.