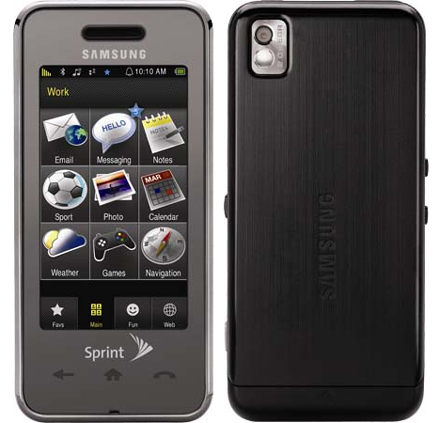 Samsung has gone on a phone-releasing frenzy this week. The SPH-M800 is worth mentioning since it looks strikingly similar to the Apple iPhone.

The details on this particular phone aren’t particularly plentiful, and the phone isn’t even 100 percent official yet, but we do know a few things. For starters, the logo on the bottom of it makes it pretty clear that, for better or for worse, it will be released through Sprint. Apparently the 5 megapixel camera that was in the recently introduced F490 has been scaled back to a 2 megapixel model here, but until we consistently see great cameras in phones I’m not convinced that it matters how many megapixels you cram in after a point. We also know that the phone features EV-DO.

We don’t know the price, but it seems very clear that the success of this model will depend largely on what it costs compared to that one from Apple.