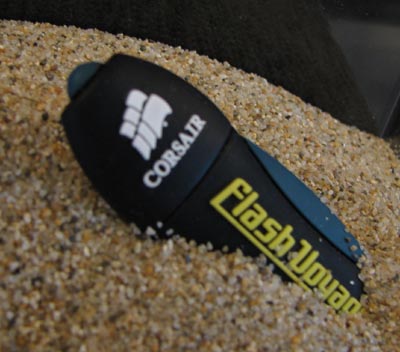 Corsair is totally rolling with the big boys these days, having landed huge deals to supply memory for Dell, HP, Alienware and others. As you know, though, Corsair does more than produce the innards of computers; they want to occupy all of your USB ports as well. Although not quite as rugged as the Survivor GT, the Corsair Flash Voyager is pretty tough in its own right, and now it’s rocking way more storage too.

At the private Corsair suite at CES, the company proudly proclaimed that they have bumped the storage capacity on their Flash Voyager line up to a full 32GB. This puts it right in line with the Survivor GT, which also received a storage bump. In the lounge, they were showing how the Flash Voyager can endure four seasons of hard times, from the rains of spring to the dirt of summer to the frigid temperatures of winter.

If you’re looking for something a little more compact than the Survivor GT, you can take a nice long look at the 32GB Corsair Flash Voyager instead. It goes for $229.