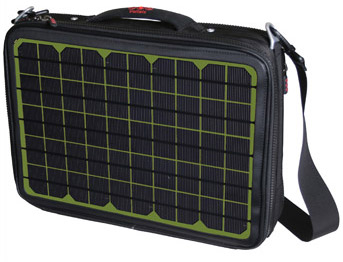 If the name Voltaic Systems sounds familiar it’s probably because of their solar backpack. The name should become even more familiar thanks to their new laptop bag called the Generator, which sports a solar panel that can provide enough power to charge the laptop inside the bag.

The single solar panel can produce up to 14.7 watts of power. That means that a laptop could be charged from a full day of sun. That means that it is now easier than ever to justify that a day at the beach is actually work. The bag comes complete with adapters to attach the bag to most laptops and other common devices. It also has a battery pack to hold the energy so it can be used even after the sun goes done.

Further adding to the green aspect of the bag, it is made of fabrics derived from recycled soda bottles. The bag sounds like a great idea, but it certainly doesn’t come cheap – the MSRP is $599.