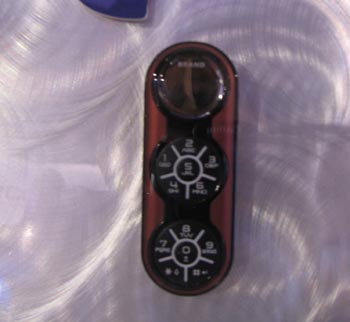 Or so they’d lead you to believe. While the booths of guys like Nokia may look impressive, the UTStarcom display at CES this week has a couple of gems that may be worth a second look. Based on the banners they have erected, they want you to pay a little more attention to their take on the HTC Touch. But that’s not the phone that caught my eye.

I don’t know if I’d ever want to use a phone that looks like this, but the UTStarcom HSM 180 has got to have one of the most unique designs that has ever made it to market. Instead of a conventional numeric keypad, it has a pair of circular controls, mimicking the rotary look, except there are only five numbers on each circle. Above these is a third circle, which serves as the primary display.

As far as specs are concerned, you get the basic stuff like GSM/GPRS/EDGE, as well as DCS 1800, PCS 1900, and HSDPA 2100. And you’ve got to admit that it’s pretty sad when they’re boasting about text message and MP3 playback.