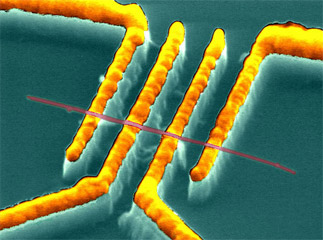 If you spent any time watching Arrested Development in the later seasons you know how awkward an artificial limb can be. That could change thanks to a stunning new use for carbon nanotubes.

They are being used to allow artificial skin to conduct sensations back to the brain. That means that prosthetic limbs would act much more like the real thing. The design is remarkably simple – a nanotube is balanced on gold filament and threaded through a rubbery polymer.

Pressure or force generates electricity which can be transmitted to the brain. That electricity can be understood by the brain as feeling. This seems like a very futuristic possibility, but it may not be so far off – scientists hope to make a prosthetic limb with this approach in 2010, so it may not be long at all before this is widely available. I can only imagine what kind of relief that could offer for the people who need prosthetics.