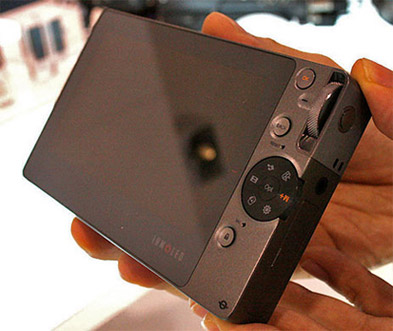 iRiver used CES to show of their upcoming iAMOLED Photo Tank, which is also being referred to as the P20. Attendees were able to touch and feel the PMP which is due in the third quarter, but their was one bizarre catch to the whole thing – the appeal of the player is the huge 4.1 inch active matrix OLED screen, but the mockup on display didn’t have a working screen. Odd.

The basics of the machine if you missed them – it is HDD based with capacities of either 80GB or 160GB. Given the screen, it is obviously targeted at heavy photo use, and it has CF and SD slots towards that end. It also has the capability to do video voice recording, and it has an FM tuner as well.

There’s no word yet on what the price will be, and you have to question if their will be huge appeal for a device this big and bulky, but it will be very interesting to see this screen live and in action.