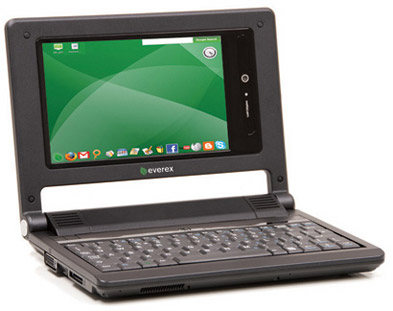 Asus is about to get some serious competition in the American market for their tiny Eee PC. The Everex Cloudbook is coming to Wal-Mart on January 25th.

The Cloudbook has been rebranded several times along the way, but the specs haven’t changed – a 1.2GHz VIA C7-M CPU, 512MB of RAM, a 800 x 480 display, and 30GB of storage capacity via a hard drive. Notably, the machine sports Everex’s own gOS 2.0. aka Rocket, which is the result of a collision between Ubuntu and Google and was launched at CES, instead of a more mainstream OS.

The machine clearly isn’t for everyone and you can only guess that it will feel a little insubstantial and will be lacking in other areas given the price, but Wal-Mart caters to a different crowd, and that crowd will certainly be excited by the $399 price tag. Let the very tiny computer wars begin.