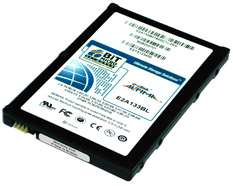 The market for solid-state drives haven’t grown as quickly as many thought because of the cost and other factors, but BitMicro Networks is betting that the market is ready to embrace a serious drive. At CES this week they have announced that they are putting the final touches on an 832GB version of its E-Disk Altima 2.5 inch serial ATA NAND flash solid-state drive.

The drive will sustain rates of up to 100MB/s and up to 20,000 I/O operations per second. It is expected that the company will begin shipping full volumes of the drives by late this year. It’s telling, and a little scary, that they aren’t willing to disclose their pricing strategy for the new drives as yet.

They could be expensive, but if they come in at a reasonable price and they are ready to go from the start then they could make a dent in a market that is hungry for fast, high performing drives.