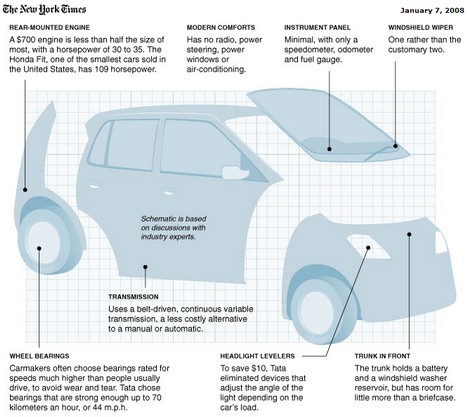 Indian car maker Tata has, as you have probably heard, has a car that costs just $2,500 brand new. The New York Times took a look this week at just what it takes to make a car that cheap.

To start, you need to look at all the things that we have come to expect that this car doesn’t have – no radio, no air conditioning, no power steering or locks, no tachometer, one windshield wiper instead of two, and an analog speedometer.

The engine costs just $700, and kicks out between 30 and 35 horsepower. By contrast, the tiny Honda Fit is good for 109 horsepower. The wheel bearings are rated up to only 70 km/h, while most cars have bearings rated for much faster than the car can go. The transmission is a belt driven, continuous variable model, which is cheaper than either manual or automatic. The truck is barely big enough for a briefcase. In other words, when you buy a car for $2,500 you get about what you pay for. A disposable car.