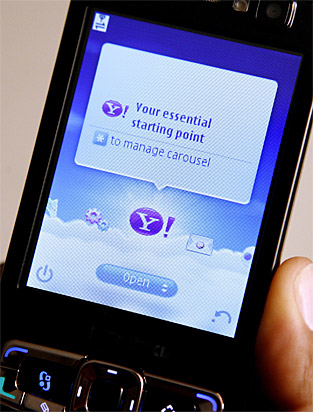 Yahoo! has refined their mobile offerings with the launch of an early beta version of Yahoo! Go 3 at CES. Yahoo! Go is the company’s flagship mobile offering, and this new open version upgrades the content and user interface thanks to feedback from consumers. Or so says Yahoo!, anyway. Navigation through the news site can be done in two ways – either the traditional carousel or a new icon layout.

It features a new Home widget that tells you what has changed since you last visited, and can be customized to include snippets of your favorite news or information. Starting later this week, a widget gallery will be available where you access widgets from partners including eBay and MTV, along with third party widgets.

American users can participate in the beta launch now, and the new version should be available on new devices worldwide later in the year.