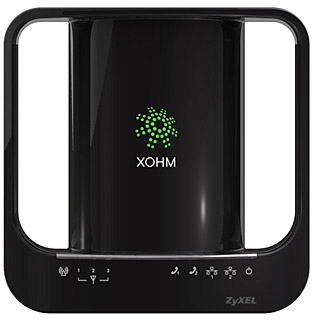 There are many people out there that are anxiously awaiting Sprint’s new Xohm network which is due later this year. A new product from ZyXEL and Sequans will only heighten that anticipation.

ZyXEL is Sprint’s designated 4G modem maker, and Sequans is their chip maker of choice. That partnership has announced their first Xohm product at CES. The ZyXEL MAX-206m2 device is a 4G modem/router that will be released in the second quarter of this year and will be targeted at the commercial market. The wireless device has built-in residential gateway functions.

No price or detailed specifications are available at this point, though we should see both soon. This is the first product released for the Xohm network, but it should start a tidal wave of new partnerships and releases as the launch date draws nearer and Sprint gets ready to maximize the impact of their incredibly expensive gamble to launch the network.