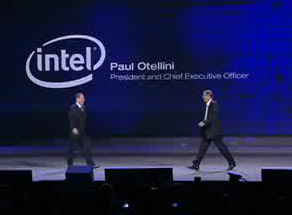 Intel CEO Paul Otellini took his turn giving a keynote address at CES. The first thing he deserves credit for is that he wasn’t as mind-numbingly disappointing as Bill Gates was in his speech. That being said, the speech was more a vision of a bright future than an announcement of anything concrete. He talked for a long time about the future of internet computing, and even had a guy from Smash Mouth (who knew that band still existed) up to help him out. That’s not quite Slash. Not surprisingly, his focus was on Microprocessors, the advances they have made, and the need for them to improve even more. Current obstacles need to be overcome before future generations of products can be meaningful.

Otellini did show off some new products, all with fancy code names. ‘Canmore’ is focused on set-top boxes, TVs and media players, while ‘Menlow’ id Intel’s first low power processor and chipset platform for mobile internet devices. Increasing the code name count, ‘Menlow’ is made up of a chipset called ‘Poulsbo’ and a processor called ‘Silverthorne’ which is five times smaller and uses ten times less power than mobile processors from 2006.