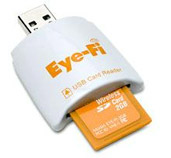 We’ve already seen the Eye-Fi Card which allows you to wirelessly transfer data from your digital camera to your PC or your favorite photo sharing site using your home WiFi network, but at CES the company has introduced more partners and shown how aggressive they are. They have announced partnerships that will allow users to upload directly to Microsoft Windows Live, Microsoft Windows Live Photo Gallery and Costco’s Photo Center. With that, there are now 20 online partners to choose from.

They have also announced that the product, a wireless SD card which retails for $99.99 and is compatible with both PC and Mac, will be available at additional retail partners including Costco, PC Mall and Mac Mall.

People seem to be paying attention to this simple but effective idea – PC World recently tabbed the card as one of the 25 most innovative products of the year.