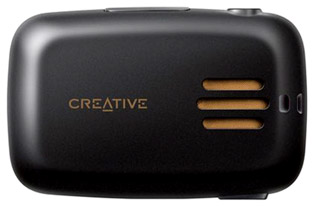 Creative seems to want to make you hate the people around you. The company has unveiled MP3 players at CES that have built in speakers. They are now calling their Zen Stone and Zen Stone Plus models ‘micro boom boxes’. The company claims that it will free people from having to wear earphones, though you can obviously still plug them in when you are anywhere that other people won’t want to hear what you are rocking out to.

The Zen Stone will come in 1GB or 2GB capacities, while the Zen Stone Plus doubles capacity to 2GB and 4GB. The Plus in the name also reflects the fancy circular display on the premium model. Both play MP3 and WMA files, while the Plus also plays unprotected AAC files. The internal battery boasts 20 hours of playback per charge.

The 2GB Zen Stone will cost about $50 when it is released, while the same sized Plus will be ten dollars more.