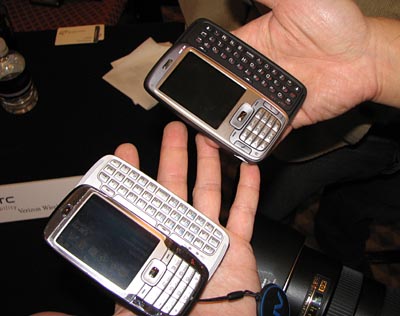 While over at Digital Experience in Caesar’s Palace, which stands as a premiere preview event for the CES 2008 festivities taking place this week, I had the chance to compare the recently released SMT5800 smartphone from Verizon Wireless with the not-so-new HTC Vox. More specifically, I took a look at the Dopod C500 next to the Verizon Wireless offering.

By and large, the two phones are very similar because they are based on the same fundamental platform. The front face is occupied by a numeric keypad and a large (non-touchscreen display). This entire top section can be slide over to the left to reveal a full QWERTY keyboad, excellent for text message and mobile email.

There are definitely differences between the two units, and the biggest is probably the lack of WiFi in the Verizon SMT5800. The color schemes are also a little different, with the SMT5800 rocking more of a silver and blue theme, whereas the Dopod had a black and red theme (particularly for the QWERTY keyboard). I also noticed that the Dopod has keys lined up in a chrome ring around the numeric keypad, whereas the Verizon phone has a much more boring matte silver. The Dopod comes with a rubberized back too, which the SMT5800 lacks. Oh, and it’s CDMA vs. GSM.