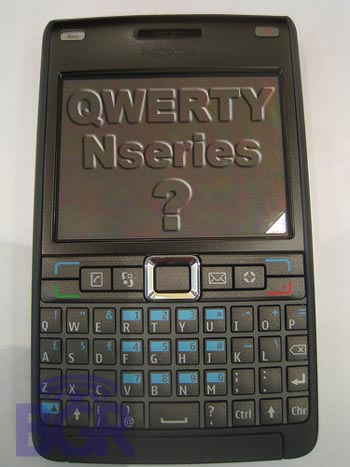 As you know, Nokia has two main lines of smartphones in its portfolio. On the one hand, you have more the multimedia-focused N-Series. With devices like the N81 and N95, you get fantastic cameras, lots of games, and plenty of music. On the other hand, you have the more messaging-friendly E-series. With handhelds like the E61i, you get a full QWERTY keyboard, push email, and other business-oriented goodies. Up until now, the two lines have not really found any middle ground. That’s about to change.

There are rumblings on the Internet that Nokia is finally working on an N-Series device that has a full QWERTY keyboard, the main feature that has been lacking from the product line thus far. Details are pretty slim at this point and the rumored cell phone doesn’t even have a name yet.

There are whispers that this new N-series phone will have a candybar form factor similar to the E61i (also like the Moto Q and Samsung Blackjack) and it will be powered by the S60 3rd Edition FP2 operating system. Set for unveiling around the second half of this year, the new smartphone is said to rock full QWERTY, a 5MP or 6MP camera, 30fps DVD video recording, and integrated GPS. Sounds so hawt! It’s probably pretty freaking expensive too.