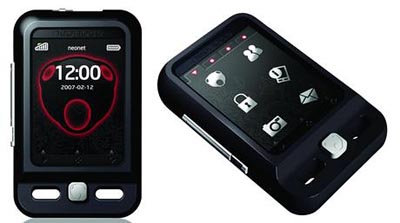 Ever since the Apple iPhone hit the market, just about every touchscreen-equipped mobile phone has been compared to the Jesus Phone of Cupertino. It’s an unfortunate comparison for many handsets, because they may not necessarily be trying to achieve the same thing as the iPhone nor do they necessarily resemble the iPhone in any way. Well, tough nookies for them, because the comparisons are inevitable.

The latest handset to be compared to the Apple iPhone is the Neonode N2 touchscreen mobile phone. Set to hit the US market some time this year, the Swedish-manufactured cell phone features the company’s patented “neno user interface and zForce optical touch screen technology.” This means that it will recognize “sweeping and tapping signals on the screen” and it doesn’t need a stylus. Yes, that sounds like the iPhone (and the HTC Touch), I know.

The Neonode N2 is not a new phone, because it has been available in Europe since Q3 2007, but this will be the first time that the handset is officially made available in the United States. Neonode plans on displaying the phone at CES next week. Maybe they’re reveal pricing and carrier information at that time too.