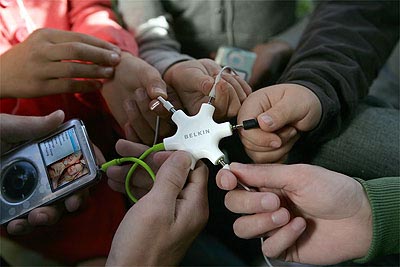 What do you do when there’s only one iPod between five friends? There are plenty of headphone splitters on the market, but most of them only split the input into two output jacks. The Belkin RockStar goes so much further than that, helping you share those tunes with four other friends.

The six-pronged device can take a single input and send it to five outputs. While this seems like it could be an interesting idea, I’d imagine the octopus effect could get quite frustrating, especially when the wires start getting tangled. Realistically, if you want to share your MP3s among five people, you may be better off with a speaker set rather than this hub and five sets of headphones.

But wait, there is an interesting additional feature here. The five output ports can actually become inputs as well, letting you mix together several tunes. If you’ve ever wondered what Barbara Streisand sounds like when she’s got Slipknot in the background, wonder no longer. Toss in Michael Jackson and you’ve got yourself a party! Party like a (Belkin) RockStar!